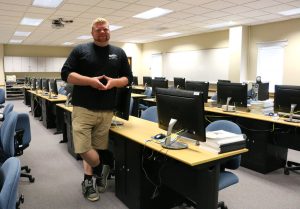 
On Saturday, after four semesters, Lohmeyer graduated from NCK Tech, certified through the business management program. It’s a process he’s gone through while also working his way up the chain of command for Gambino’s Pizza in Hays. Starting as a part-time driver around the same time he began classes at NCK Tech, Lohmeyer, in just shy of two years, is now the general manager of the restaurant.

“When I got out of the army, I had a job (before Gambino’s) and I was just not going anywhere,” Lohmeyer said. “I thought, ‘Why not get into college?’ It had been so long since I had graduated from high school. Nine years out of high school’s a little bit rough to join a university, so I thought I’d ease into (NCK Tech) and see what I could do.”

He has been able to gradually bring what he has learned as a student and put it into helping himself become more of a leader. It’s a process Lohmeyer says has, at times, been a challenge, especially getting used to being in a classroom. But, it has made him feel more confident going into work and applying what he learned through the classroom into what can help in the business.

“As I learn it, I can directly apply it to being a manager,” he said. “If we go over personnel or how to handle situations or whatever the case may be, that night when I come to work, I can pass on what I learned in school to the people I work with or that work for me so that we can always build our environment to be better than it was the day before.”

A parent of two children, 6 and 4, Lohmeyer enjoys spending his free time with them. He’s also into working out and writing.

A native of North Carolina, growing up in Spindale between Charlotte and Asheville, adjusting to Hays has been difficult at times. However, he’s been able to keep himself busy with his job, school and kids, and there’s been a lot about western Kansas he’s begun to appreciate.

The work Lohmeyer has put into school is something noticed by his instructors as well.

“He’s a bright individual,” Business Technology instructor Jennifer Younger said. “He’s responsible for what he does and he’s hard working and dedicated.”

With at least one part of the school process complete, Lohmeyer said he might go back to college and enroll in classes at Fort Hays State University, or he might just take some more classes at NCK Tech.

He enjoys his job with Gambino’s and has been pleased with the restaurant’s move from a 24 seat area to the former Pizza Hut building on Vine Street. After renovation work, the restaurant he manages now seats close to 100.

“It’s a really great program,” Lohmeyer said of the Business Technology program at NCK Tech. “We had really great teachers. Really great faculty. The students came to learn. It was definitely a very easy place to get your education. There was such a one on one feel with teachers that genuinely care. I feel like I was really fortunate.”