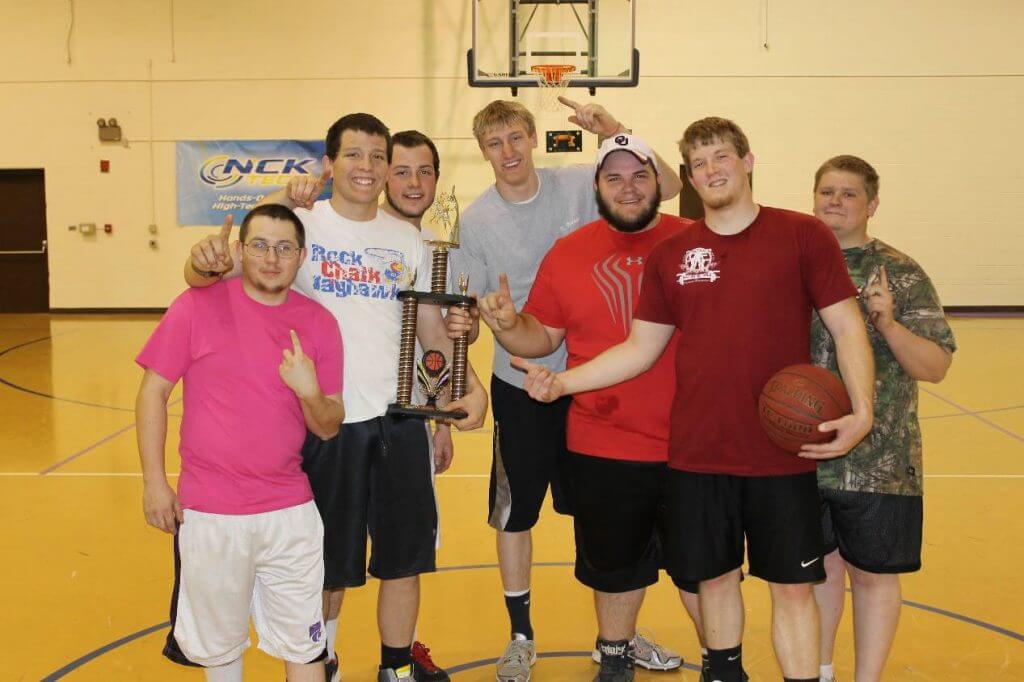 March Madness has arrived at NCK Tech! No, it’s not the Big 12 Tourney or Wichita State’s exceptional season or even the three local Beloit high school teams. Our madness is all about the NCK Tech Intramural Basketball Championship game on March 13th.

The Championship game pitted Team D against Team B. Team D players are: Jacob Arnold, Austin Chavez, Brandon McDowell and Trent Richardson of Welding; Caleb Amundson and Doug Weers of Heavy Equipment and Paden Unruh of Auto Tech. Team B players are: Austin Buce and Kadin Carter of Auto Collision Repair; Will Redding and Luke Schroer of Electricity; Toby Hubka of PHAC and Chuck Burkes (a non-student participant). he two teams came into the game with identical 4-1 records. Team B’s only loss was to Team A (Ag Tech) during the first week of the regular season and Team D’s only loss was to Team B on February 26th by the score of 52-46. As such, the Championship game was a rematch of top two teams.

The opening tip off was controlled by Team B, but the ball was quickly stolen by Team D and the first points scored were on a lay-up. The level of play intensified immediately as both teams began to drive into the paint. As the level of play and the number of fouls increased, single points began to rain down. The lead changed a few times throughout the first half and ended in favor of Team B, with a three point advantage of 23-20.
The level of play continued to increase in the second half. Hubka and Redding of Team B found their marks as their three point shots began to fall, but Unruh and Arnold of Team D seemed to answer nearly every shot with their own from behind the arc. Team D had a three point lead as the clock dipped under the one minute mark and since the fouls were only “shooting” fouls, they were able to run out the clock and win by the score of 47-44. Both teams played extremely well and deserve praise for their efforts. Team D received the “Traveling Trophy” and will also receive “Champion” t-shirts. Congratulations to all both teams for a great Intramural season!