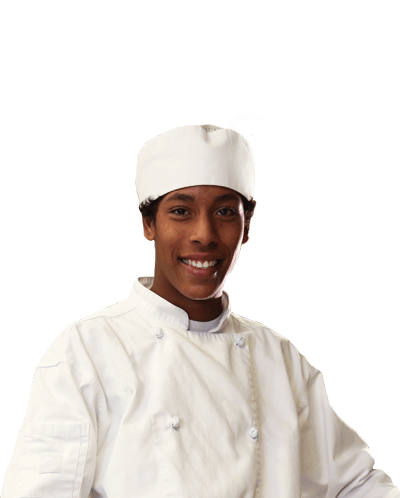 Don’t be surprised to stroll by a hot new breakfast joint several years from now in Kansas City. With any luck, Avery Beverly, culinary arts student at NCK Tech, will by then have donned his professional chef’s hat.

Beverly started the year-long program in fall 2014 on the Hays campus after realizing his passion for cooking could become his career.

“My mom cooked a lot growing up, so I’d always been interested in being in the kitchen,” he said. “I heard NCK Tech was reviving its culinary arts program so I said, ‘sign me up.’”

At first, the instructor worked with students on the basics. The importance of fundamentals, such as the proper way to cut an onion, at first came as a surprise to Beverly.

“You think you know a lot about cooking, then you realize how much you have to learn,” he said. “Luckily, our teacher is skillful, so we take everything he says seriously.”

Philip Kuhn, certified chef and culinary instructor at NCK Tech, said the program gives students the confidence and knowledge to work with different ingredients and cuisines.

“The culinary field is always changing, so it is imperative to give students a platform from which to grow and learn,” he said. “NCK Tech’s culinary program is geared specifically toward the student. They receive individualized attention to ensure their experience is in no way diluted.”

Now, Beverly’s class has moved on to creating plates from the techniques they’ve learned. He’s made his favorite creation — homemade pesto with pasta — for his family. Cooking for others is a great way for Beverly to prepare to make his dreams a reality.
After graduating the culinary arts program at NCK Tech, Beverly hopes to work his way up in a restaurant kitchen in Kansas City, and eventually open his own restaurant.

“A brewery here in Hays inspired me to want to open a combination of a beer and breakfast restaurant,” said Beverly. “I want to incorporate my own beer into delicious breakfast foods.”

Other classes away from his cutting board will help Beverly reach his goals. He also is taking a business math class as a general education course.

“It deals with sales and expenditures,” he said. “If I open my own restaurant, I’ll definitely need to know these things.”

As Beverly finds success in the culinary world, he said he will always remember who gave him the sturdy foundation he needed to get his footing — his instructor at NCK Tech.
“He’s just trustworthy,” said Beverly. “He explains the reasons behind a particular method of cutting. If we mess a recipe up, he knows why — we poured in sugar too fast, or used too much butter. It makes class much more fun to know we have someone so talented in our corner.”